The subject matter of Management and Social Sciences is man, his management and behaviour in society. It involves the study of human behaviour, its environment, management, administration and its element, and the interaction among these. Its knowledge and approach are inevitable for improving the quality of human life. The various disciplines in the management and social science study human behaviour from their special standpoint. However, being a dynamic area of study, there are different standpoints which constitute the various disciplines in the Management and Social Sciences which we belief that adequate training in these discipline will develop the mind, impart both theoretical and practical knowledge on the individual students, develop self-confidence, help to innovate and self-reliant in the field.

(i)     The need to describe, explain, predict human behaviour and the socio-cultural environment;

(iii)  The need to raise our consciousness in public socio-economic and other national policies;

(iv) The need to provide basic knowledge and skill needed for the understanding and analysis of problems related to the management and administration of industrial, commercial, public and other human organisations;

(v)   The need to equip students with knowledge and skills of decision making; especially the analytical skills needed for recognising, defining and solving problems; and

(vi) The need to develop in students, leadership and interpersonal relations skills in management. 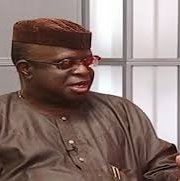 DAVID ADETUYOLE OLUFEMI OTUBANJO is a professor of Political science. Taught Political Science for 30 years at the University of Ibadan (1977  2007). Served in various capacities, during this period

(10)    Special Assistant in the YarAdua/Goodluck Campaign Headquarters and Co-ordinator of Logistics and Operations during the National Campaign Tour, 2007.

(11)    Chairman Committee for the Conduct of State Congress for the  Election of State Executive Council of the PDP in GOMBE STATE, December, 2007.

(12)    Chairman, Committee for the Conduct of PDP primaries for ADHOC DELEGATES, in Niger State, December, 2010.

(13)    Chairman, Committee for the conduct of PDP primaries for NATIONAL DELEGATES, in Niger State, January, 2011.

You are invited to Phase One of the 6th Matriculation Ceremony

Chrisland University Vice Chancellor, Prof. Mrs. Chinedum Peace Babalola is set to speak at the 2021 celebration of the International Day of Education organized by African Union

The Management of Chrisland University has disclosed that physical resumption of students for the continuation of the first semester, 2020/2021 session will commence on Sunday, 31 January, 2021 and Sunday, 7 February, 2021.

In today's business sphere, accountancy has become an integral part of the mechanism by which we reconcile our ideas with the changing environment. The purpose of this website is to make accountingeasy to understand. We have made every possible attempt to change your ambiguous world of accounting into

One of the first of its kind, this course responds to recent events which highlight the importance of security in preventing, controlling and responding to all forms of crime, whether originating in local, national or transnational contexts. International in its outlook, this course covers global security issues, including terrorism and transnational crime

Five SSCE credit passes including English Language, Mathematics, Economics one science subject & any other one relevant subject in not more than two sittings.

Five SSCE credit passes including English Language, Mathematics, Economics one science subject plus any one from Accounting, Business Methods, Commerce, Government , Geography & Statistics in not more than two sittings.

Five SSCE credit passes including English Language, Mathematics, Economics one Social/Art subject plus any one from  Accounting, Business Methods, Commerce,  Government, Geography & Statistics in not more than two sittings.

Five SSCE credit passes including English, Mathematics, Economics and any two of Arts/Social Science Subject in not more than two sittings.

Five SSCE credit passes including English, Mathematics, one science subject, Government/History and any two other subjectsU

Five SSCE credit passes including English Language, Mathematics, Government or History and any other two subjects in Arts or Social Sciences in not more than two sittings.

Five SSCE credit passes including English, Mathematics and Economics in not more than two sittings.