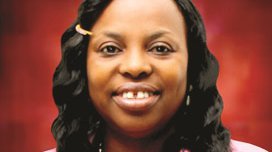 From the earliest of times, there has always been a special class of women who defy all odds to achieve the incredible. In the history of healthcare research and delivery, some names readily come to mind in this regard. There was Elizabeth Blackwell, who was the first woman to obtain a medical degree; there was Florence Nightingale, who revolutionised nursing practice; there was Prof. Dora Akunyili, who rescued the Nigerian pharmaceutical sector from the grip of drug counterfeiters. There was Dr Ameyoh Adadevoh, who, at the risk of her life, formed a bulwark against the spread of Ebola in the country.

Born into the family of Sir Dr Isaac Ebere and late Lady Adeline Anyabuike who hailed from Imo State, Prof. Babalola obtained her Bachelor of Pharmacy degree in 1983, her M.Sc. in 1987 and a PhD in Pharmaceutical Chemistry (Pharmacokinetics option) in 1997 from the University of Ife (now Obafemi Awolowo University, OAU). Therefater, she proceeded to the University of British Columbia, Vancouver, Canada for a pre-doctoral fellowship between 1994 and 1995. In 2012, she completed her postgraduate diploma in Advanced Industrial Pharmacy Training (IPAT) jointly from Kilimanjaro School of Pharmacy, Tanzania and Purdue University, USA.

She began her lecturing and research career as a junior trainee fellow, Department of Pharmaceutical Chemistry in 1985 at OAU. She joined the University of Ibadan in 1998, as a senior lecturer, a year after she received her PhD from OAU. In 2003, Babalola became an associate professor, after which she was promoted to full professor in 2006. She served as the head of department of Pharmaceutical Chemistry and director of General Studies Programme where she introduced a new course module – Drugs and Mankind – for all the undergraduate students of Pharmacy.Not only did she introduce a course component, but she was known as an agent of change. Her innovative acumen propelled her to introduce a number of initiatives, including the malpractice-free processing of examination which the school adopted as post-UTME screening process till date.

Further stridesIn 2015, UCH Ibadan appointed Babalola as a specialist/consultant, making her the first pharmacist to be so appointed by any tertiary hospital in Nigeria alongside being an adjunct professor at the College of Medicine, UI. Serving two terms as the seventh dean of Faculty of Pharmacy between 2013 and 2017, Babalola achieved two main agendas, among others. These were the undergraduate curriculum review and the building of a sophisticated laboratory complex for the Faculty.

Babalola’s research interest focuses majorly on pharmacokinetics/pharmacodynamics, pharmaceutical analysis, pharmacogenetics and bioethics as tools for studying drug disposition in Nigerians, in order to guide therapeutic optimisation in Africans. Her research has revealed significant drug-drug interactions between antimalarials and antibiotics, with significant reduction in antibiotic levels, which calls for dose adjustment. She and co-authors reported the first pharmacogenetic study in Nigerians (healthy and sickle cell patients). She co-conducted one of the largest pharmacogenetic/pharmacovigilance studies on sulpha drugs in over 1,000 healthy and HIV/AIDS infected Nigerians.

In 2011, Babalola led a multinational/interdisciplinary team, which won the MacArthur Foundation grant (approx. $1 million) to set up Centre for Drug Discovery, Development and Production (CDDDP), UI – first of its kind in Africa – for building the capacity of Africans to make their own medicines, as well as improving access to quality medicines.

Babalola was the principal investigator of the CDDDP; and so it came as no surprise when the Centre was chosen by NEPAD/AMRH as one the 11 centres of excellence in Africa and a number of its medicinal/herbal products ready for NAFDAC registration. In her pursuit to see significant improvement in the Nigerian healthcare system, she developed a novel High-Performance Liquid Chromatography, a technique in analytical chemistry that is used for separating, quantifying, and identifying components in a mixture. This method, used in the analysis of quinine in biometrics, has brought about clarification in the pharmacokinetics of quinine in Africa as well as forming the basis of malaria patent dose optimisation.

Her persistence and unrelenting desire to contribute to humanity and science through her research, alongside Dr Adeboye Adejare of the University of the Sciences in Pennsylvania, propelled her selection for the African Diaspora Initiative in 2014. She currently consults for pharmaceutical industries in the areas of drug quality assessment, bioequivalence and clinical trials.

Babalola is a recipient of over 25 fellowships, awards, and grants across the globe. In 2016, she was selected as one of 10 most influential female scientists in Nigeria. She was also selected as the only African member, Strategy Working Group (SWG), joint Committee of International Council for Science (ICSU) and International Social Science Council (ISSC) in France.

Just recently (2018) she was named by Silverbird TV as one of the 16 prominent Nigerian women that have excelled in Science and Research. She also received a merit award from the Association of Lady Pharmacists (ALPS) of Nigeria due to her achievements and contributions to the pharmacy profession. She has over 100 publications (peer-reviewed and abstracts) in reputable journals. She has taught and mentored many students and has supervised over 50 Masters and PhD projects.

A WhatsApp group "CHRISLAND B-ACCTG" has been created solely for Basic Accounting Processes and Systems course.

MESSAGE FROM THE OFFICE OF THE REGISTRAR