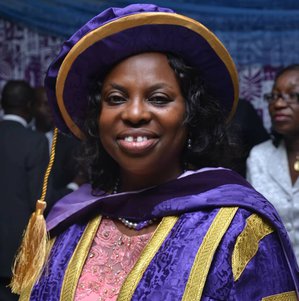 Professor (Mrs.) Chinedum Peace Babalola hails from the family of Sir Dr. Isaac Ebere & late Lady Adeline Anyabuike from Imo State, Nigeria. She is a Pharmacist, a distinguished Professor of Pharmaceutical Chemistry/Pharmacokinetics and the immediate past Dean of Faculty of Pharmacy, University of Ibadan. She attended University of Ife (now Obafemi Awolowo University - OAU) to obtain her Bachelor of Pharmacy (1983), M.Sc. (1987) and PhD (1997) in Pharmaceutical Chemistry (Pharmacokinetics option). She proceeded to University of British Columbia, Vancouver, Canada for a pre-doctoral fellowship between 1994 and 1995. She later obtained a Diploma in Advanced Industrial Pharmacy Training (IPAT) jointly from Kilimanjaro School of Pharmacy, Tanzania and Purdue University, USA. Professor Babalola became a registered pharmacist in 1984 and a registered public analyst (MIPAN) in 2001.

Professor Babalola started her teaching and research career in the Department of Pharmaceutical Chemistry, Faculty of Pharmacy, OAU, Ile-Ife in 1985 as a Junior Trainee Fellow, rose through the ranks and transferred her services to the University of Ibadan, in 1998 as a Senior Lecturer. She was promoted to grade of Associate Professor in 2003 and full Professor in 2006. By this promotion, she became the first female Pharmacist Professor in the University of Ibadan and the first female professor to deliver an inaugural lecture from Faculty of Pharmacy in 2011.

For over 30 years, Babalola has focused her research on pharmacokinetics/pharmacodynamics (PK/PD), pharmaceutical analysis, pharmacogenetics and bioethics as tools to study the disposition of several drugs (antimalarials, anti-microbials and other medicines) in Nigerians as a guide to optimizing therapy in Blacks. She has combined pharmacokinetics with pharmacodynamic principles in order to relate drug levels in the body to treatment outcome and thus, improve rational dosage regimen. Her research has revealed significant reduction in levels of some classes of anti-bacterials by some antimalarial drugs in human thus calling for urgent dose regimen adjustment. The outcome of her research has revealed wide ethnic/racial/genetic variations in drug disposition and treatment outcome which further generated her interest in pharmacogenetics with respect to the African population.

She and co-authors reported the first pharmacogenetic study in sickle cell patients and healthy Nigerians using the prophylactic antimalarial drug, proguanil as a probe. The report revealed that some Nigerians are poor metabolisers, carriers of the mutant poor metabolizer genes - CYP2C19, as well as marked differences between sickle cell patients and healthy population on this metabolic pathway.

Babalola is an experienced administrator and an agent of positive change. She has been Head of Department (first female) of Pharmaceutical Chemistry (2003-2005 and 2012 – 2013), and Director, General Studies Program (GSP) Unit, University of Ibadan, (2005-2010), where she introduced a new course called “Drugs and Mankind” and also brought several innovations including running malpractice-free processing of examinations which the university has adopted for the process of post-UTME till date. .

Between 2013 and 2017, Babalola served two-tenures as the Seventh Dean of Faculty of Pharmacy, University of Ibadan; and again, the first female to occupy the distinguished position. As a Dean, two main items on her agenda were undergraduate program curriculum review (which was overdue by over 18 years) and a purpose-built Laboratory complex for the Faculty. These two feats she confidently and successfully initiated their processes with feasible end dates in view. Others were renovation and equipping of an e-library, beautification of the Faculty, attraction of funds and support to the faculty, Faculty strategic plan, hosting of a professional Journal, enhanced staff promotion and student welfare, introduction of Dress code and White coat ceremony among others. She established and mentors student leadership club and debating/speech club amongst pharmacy students which has made them win speech contests and debates within and outside Ibadan. Babalola was appointed as Head the Deans Forum established by Pharmaceutical Society of Nigeria (PSN) for all Pharmacy Schools in Nigeria from inception in 2014 till 2017 when her tenure as Dean expired.

In her deep craving for translational research in the area of drug discovery and development for Africans and by Africans, Prof Babalola leading a team of researchers in 2011 won a competitive MacArthur Foundation grant for Higher Education to set up a Centre for Drug Discovery Development and Production (CDDDP) in the University of Ibadan worth approximately One million USD. The Centre, which MacArthur Foundation refers to as the “First of its Kind in Africa” was designated by New Partnership for African Development (NEPAD)/African Medicine Regulation Harmonization (AMRH) in 2014 as one of the eleven Regional Centres of Regulatory Excellence (RCORE) in Africa with oversight functions. The Centre presently runs two University-Senate approved courses: Postgraduate Diploma in Drug Discovery and Development (PDDD) and Master’s in Drug Development and Regulatory Pharmacy (MDDRP). It also runs short-term training workshops and conferences to fulfil her mandate. The target participants are personnel and would-be personnel of Pharmaceutical industries, Medicine Regulatory Agencies, healthcare providers/administrators and Academia. CDDDP has a number of medicinal/herbal products ready for registration by NAFDAC.

She is the first pharmacist to be appointed as a specialist adviser and consultant in a Nigerian hospital – University College Hospital (UCH), Ibadan where she contributes immensely to the research, capacity building, and enhancement of pharmaceutical services in UCH.

She is also an adjunct Professor in the Institute of Advanced Medical Research and Training (IAMRAT) College of Medicine, UI where she collaborates with several other medical researchers within and outside Nigeria.

A Co-Principal Investigator for NIH/Fogarty D43 grant between UI and University of Chicago focused on interdisciplinary training of African clinical/biomedical researchers and research on non-communicable diseases (NCDs); a Collaborator for another D43 NIH/Fogarty grant on NeuroAids between University of Ibadan and NorthWestern University, Chicago, USA;

Professor Babalola is also making waves in public health related issues. She was a member of University of Ibadan/University College Hospital Institutional Review Board (UI/UCH IRB) from 2002 to 2013. She is a contributor to the first written ethical guidelines in UI & UCH. She also served as Co-investigator in Community Directed Intervention (CDI) programme sponsored by W.H.O. between 2004-2008 for the control of malaria, tuberculosis, Vitamin A deficiency and onchocerciasis in selected Local Government Areas in Oyo State.

Professor Babalola is a member of many international/national organisations such as International Society for the Study of Xenobiotics (ISSX), International Association of Therapeutic Drug Monitoring (IATDM-CT), African Organisation Research Training in Cancer (AORTIC), Pharmacists Society of Nigeria (PSN), Sickle Cell Hope Alife Foundation (SCHAF) and Institute of Public Analyst of Nigeria (IPAN) to mention a few.

In 2016, she was selected as one of 10 most influential female scientists in Nigeria (10-most-influential-nigerian-women-in-science She was recently selected as the only African (out of 11 persons world-over) member of the Strategy Working Group (SWG) of the joint committee of International Council for Science (ICSU) and International Social Science Council (ISSC) globally (http://www.icsu.org/news-centre/news/top-news/members-of-strategy-working-group-and-transition-task-force-appointed-to-develop-frameworks-for-possible-icsu-issc-merger).

Mentoring gives her joy and she has taken her mentees and junior colleagues at the University of Ibadan and Obafemi Awolowo University Ile-Ife on the ride with her by promoting their independent careers. She has supervised several undergraduate and postgraduate students. Babalola has published over 130 papers comprising of peer-review journals, monographs, book chapters and abstracts in reputable international and local outlets.

Extracurricular activities: For Chinedum Babalola, there is no dichotomy between the secular and the spiritual. She loves God, assists her husband in the church ministry and oversees the women ministry including youths and children. She loves children and youth ministries. She loves music and loves to worship God personally and has been a member of various choirs at one time or the other. She has been guest speaker at many religious and empowerment programmes.

Family: Professor Chinedum Peace Babalola is married to a very supportive husband and charismatic minister of God’s word, Venerable Collins Olufemi Babalola, who has served God in several ministries and churches. He is presently the Vicar/Archdeacon of St Stephen’s Church Inalende, Ibadan in Ibadan Diocese. The union is blessed with three wonderful children.

A publication of Chrisland University

Goodwill message from the Vice-chancellor