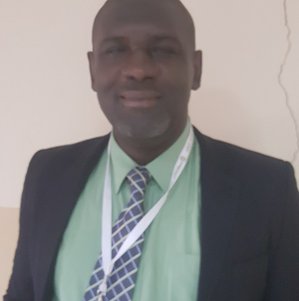 He was Born almost 5 decades ago to the family of Late Rev (Prof) & Mrs Cornelius Olowola of Ogori, Ogori/Magongo Local Government Area of  Kogi State, Nigeria. He obtained his first Degree in (BAED) from the University of Ilorin in 1992 and  a Masters in Public Administration (MPA) from Ladoke Akintola University, Ogbomoso, Oyo State.

He started his career in 1995 as a copy writer with Leo Studios, Ikoyi, Lagos State. He then joined ECWA Theological College Lagos, where he served as Lecturer and Dean, Student Affairs. In 2001 He joined the services of Accrediting Council for Theological Education in Africa (ACTEA). He served as Resource Development Officer and Public Relations Officer till November 2005.

Mr David Ayokunle Olowola joined the services of Bingham University at inception in January 2006 as Senior Assistant Registrar and Special Assistant to the Vice-Chancellor on Fund Mobilization, Policy and Linkages. He served on the team of various committees which includes: Secretary, Students Orientation Committee, Secretary, Strategic Planning Committee for the University, Secretary, Marketing Committee and Secretary ICT Committee (Pioneer Webmaster of the University). He also served in various capacities in the Registry such as Student Affairs Officer, Head Establishments Division, Head Academic Division etc.

Mr Olowola was promoted through the ranks and attained the rank of Deputy Registrar and subsequently appointed acting Registrar in December 2014. He took charge aa a Principal Officer and the Chief Administrative Officer of the University and was able to coordinate an outstanding convocation ceremony  in the University in which two former Nigerian Presidents were in attendance in December 2016. Mr. Olowola a Fellow of the Institute of Public Administration,  a member of Association of Nigerian Universities Public Administrators (ANUPA) was able to pioneer staff training amongst non teaching staff amongst other achievements in the Registry.

The father of two joined the services of Chrisland University, May 1, 2018 as a Deputy Registrar and was confirmed by the University Council as substantive Registrar, October 2018.