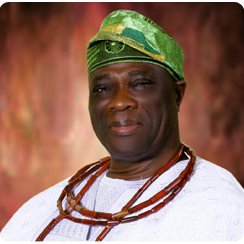 Born on 24th August 1938 at Ilesa, Osun State Chief Olu Falomo was educated at Government, Ibadan, College for the Distributive Trades, London and later at the University of Lagos. He was one of the pioneers of Television and Commercial Radio Broadcasting at WNTV and WNBS in 1959 and 1960. He later transferred to Nigerian Broadcasting Corporation Commercial Services in Lagos in 1961 as the Corporation’s first Production Unit Officer. In 1963 he went into Advertising, first at West Africa Publicity Limited which later became Lintas Limited and rose from Trainee Client Service Executive to Client Service Director and later transferred to Ogilvy, Benson and Mather Nig. Ltd, as an Executive Director. He recently retired as Managing Director/Chief Executive Officer of Forum Advertising Ltd, an outfit he founded in 1986.

Safes Deposit Limited and Principal Consultant, Olu Falomo & Associates. Chief Olu Falomo is a member of some charity organizations such as, The Nigeria Society for the Blind, where he has been a member of the Executive Council since 1987 and was the Chairman of the Executive Council of the Society, Ile Aanu Olu Pre-School Unit for Physically Challenged Children where he was the Chairman of the Management Committee for several years until recently when he handed over to a younger person and was made the Patron of the School. He is also a Past President of the Rotary Club of Surulere.

He was also a member of the World Board of Directors of the International Advertising Association (IAA) from 1990 – 1994. He was the second person to be made a Fellow of the Registered Practitioners in Advertising in Nigeria (FRPA). Chief Olu Falomo is a renowned Socialite who is an active member of several Social and Cultural Clubs among which are – Island Club, Lagos, of which he is a Past Chairman and Trustee of the Club, The City Club (Past Chairman), The Ef-Ef (Faithful Friends) Club (Past President), Ikoyi Club 1938 (Life Member), Lagos Lawn Tennis Club, Yoruba Tennis Club, “Club 38” (Past Chairman), Ilesa Frontliners (Past President), Ilesa Social Elite and “The Board” where he is the current Chairman. Chief Olu Falomo was married to Mrs. Hilda Titilola Falomo (nee Bajulaiye) a Lawyer/Insurance Executive who passed on to the Great Beyond about 22 years ago and they are blessed with Children and Grand Children. Olu is a devout Christian and a prominent member of the Cathedral Church of Christ, Marina, Lagos, where he has served in various capacities including ten years on the Standing Committee, three years as Chairman of the Feast of Dedication Committee, Chairman of the Gala Night Fund Raising Committee, Chairman of the Membership Committee, Chairman of the Think-Tank Committee, First Coordinator of the Community Hymn Singing Programme.

He was Social Secretary and later Secretary of the Cathedral Circle, Social Secretary and later President of the Cathedral Christian Brothers. He was the Leader of Group C of the Cathedral Guild of Stewards and was recently honoured by the Lagos Diocesan Guild of Stewards for exemplary service. He is a Patron of several Church Societies in Lagos and elsewhere in Nigeria. He was the founder and co-ordinator of the Surulere Prayer Breakfast Group for over 20 years and also the Publicity Secretary of the Christian Laity of Nigeria for over 30years. He is the Otun Baroyin of Oke-Ona Egba, Lomoofe of Ilare-Ijesa, He is the Lofosan of Ifosan Quarters in Ilesa, Osun State.